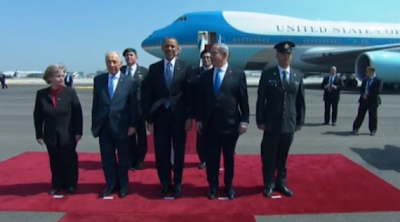 ""Peace must come to the Holy Land," Barack Obama said Wednesday as he landed in Israel for the first time as US president in a bid to ease tensions with his hosts and to frame policy on Syria and Iran...

"It is in our fundamental national security interests to stand with Israel. It makes us both stronger," Obama said, launching a visit draped in symbolism but bringing little hope of progress towards Israeli-Palestinian peace." Jakarta Globe

Much of our Christian emphasis on foreign policy in the Middle East today is based on the promise that God made to Abraham in Genesis 12:3:


"And I will bless them that bless thee, and curse him that curseth thee: and in thee shall all families of the earth be blessed."

The first half of this verse is a promise that God made to just one person, Abraham. The original Hebrew is in the second person singular, meaning that God is speaking only to Abraham. The King James Version correctly reflects this grammatical construction, since "thee" is singular, referring only to one person, whereas "ye" would refer to multiple persons.

Our mission as Christians is found in the Great Commission. We are to evangelize, baptize and teach. We are not to try to hasten Christ’s coming by agitating war and violence in the Middle East. Zionism is based on a total misunderstanding of what the Bible teaches.

Christian Zionists claim to have 70,000,000 followers in America, who insists that our politicians render unquestioning obedience to the military and political agenda of the Israeli government. Does God really demand that we support all actions and activities of the Israeli government, even if those actions violate God’s standards of righteousness? [1] 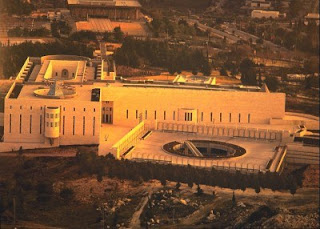 The Israel Supreme Court building has Masonic architecture,
and was the creation of the Luciferian Rothschild Dynasty.[2]

One message that Freemason Albert Pike received from his spirit guide was described in a letter written to Giusseppe Mazzini of Italy. Mazzini was a 33rd degree Mason who became head of the Illuminati in 1834 and founded the Mafia in 1860. This letter graphically outlined plans for three world wars that were seen as necessary to bring about the New World Order. The first two wars and their circumstances were accurately predicted events that have already taken place. This is not because demons have powers of prophecy, but because Satan’s agents have undertaken to manipulate political events to closely follow his designs.


“The Third World War must be fomented by taking advantage of the differences between the political Zionists and the leaders of Islamic world, which was caused by the ‘agentur’ of the ‘Illuminati.’ The war must be conducted in such a way that Islam (the Muslim Arabic World) and political Zionism (the State of Israel) mutually destroy each other.[3]

Christian Zionism is a political agenda that claims to be based on the Bible, but isn't. Dispensationalism was invented to carry out the Luciferian objective of creating order out of chaos, then claiming Jerusalem for the seat of the Antichrist. 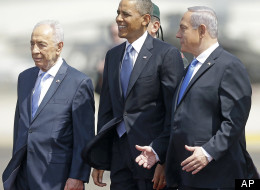 This is why we are in the Middle East, and why President Obama is with his two like-minded, blue necktied Masonic cohorts in crime.