The Lausanne Movement and the NAE


Billy Graham is one of the most beloved and respected evangelists of the 20th century. He is also one of the most compromised Christians of our time. His involvement in the ecumenical movement is well documented, he's a 33rd degree Freemason, and he has several questionable friendships in high, crooked places. He has publicly endorsed the National Council of Churches and the World Council of Churches, both known Communist fronts working toward the one world religion.[1] He has embraced Universalism unashamedly in his old age.

Over 30 years ago, as Graham started preaching internationally, he united all evangelicals in the task of evangelizing the world. One of the most influential documents in modern Evangelical Christianity is the Lausanne Covenant, and was written and adopted by 2,300 evangelicals at the International Congress on World Evangelization in Lausanne, Switzerland. 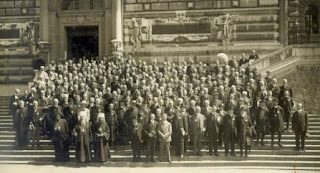 This video describes Graham's leadership in the Lausanne Covenant and Conference.

The following are current denominational members of the NAE:

This leads me to believe that the National Association of Evangelicals have long supported ecumenism and their goal of unity. As you read in the last post, Leith Anderson, President of the NAE, has been appointed to the Presidents new faith council. It is important to note that Anderson signed the Manhattan Declaration, recognized as an ecumenical document/pact between leaders of socially liberal denominations.[3]

Anderson didn't think to stop there. He also signed the interfaith document "A Common Word Between Us and You" in 2007.  This document opened interfaith dialogue between Christians and Muslims. Among the organizations backing the dialogue were the World Council of Churches (WCC), and the World Islamic Call Society (WICS), a network with about 600 affiliated Muslim bodies. It calls for peace between Muslims and Christians and tries to work for common ground and understanding among both faiths, in line with the Qur'anic commandment to "Say: "O People of the Scripture! Come to a common word as between us and you: that we worship none but Allah" and the Biblical commandment to love God, and one’s neighbour. [4]