"Kabbalism is a system of Jewish mysticism and magic, and is the foundational element in modern witchcraft. Virtually all of the great witches and sorcerers of this century were Kabbalists."
William Schnoebelen, The Dark Side of Freemasonry


The Kabbalah is not new. It’s been around for centuries. The Kabbalah is actually ancient magic. It is an exotic blend of devilish, sometimes fanciful, New Age mystical practices topped by a philosophical bent of Jewish supremacism. Orthodox Judaism, or phariseeism, is rife with kabbalism, and Jewish rabbis are the Kabbalah’s greatest promoters.[1]


"The New Age movement is best understood as a 20th century revival of an ancient religious tradition - Gnosticism. Their beliefs and practices trace all the way back to Rosicrucians, the Renaissance magic societies, medieval witchcraft, the Knights Templar, to Gnosticism, and back to the Greek Mystery religions and the Egyptian cults."

It is through the Kabbalah that the practice of Kundalini can be found. The Kabbala incorporates within it the image of Sephiroth Tree of Life, which is a Gnostic symbol of both the Serpent on the Tree, as well as a map of the Kundalini serpent up the human spine through the chakras. 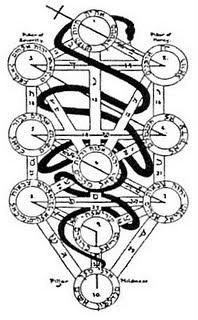 From a Gnostic source, the author writes:"The Kundalini is the force of the Holy Spirit that gives you enlightenment, powers. So we are not the only ones that know about the Kundalini. Many religions in secrecy also know this." [2]

This information flourished during the first century. Since Gnosticism is of the nature it is, it swiftly spread in the early heretical Church.

The Knights Templar and Baphomet 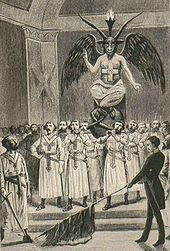 The Knights Templar had a name for the Kundalini power, which was called Baphomet. It was through the symbolic Templar kiss that the breath of life was transmitted. The "Mother of Breath" was Baphomet.

Baphomet was a pagan god, and revived in the 19th century as a figure of Satanism. The image of a black goat-god was adopted by Templar Eliphas Levi. It is the image of Baphomet that is worshiped by Freemasons and modern Satanism.

Through the occultic ceremonies of the Knights Templar and their experience with Kundalini, they had the timeless revelation of "Be still and know that I AM GOD." [3]

A Greater Gift
Perhaps you are still not totally convinced that Kundalini is being practiced in the Charismatic and Pentecostal churches. Some people say that the baptism with evidence of speaking in tongues (a manifestation of Kundalini) were stopped by the Catholic church, and Scripture doesn't support that tongues would cease. But God revealed to Paul that sign gifts would cease, when he said, "whether there are prophecies, they will fail; whether there are tongues, they will cease; whether there is knowledge, it will vanish away" (1 Cor. 13:8).

There was a specific purpose for the sign gifts of that era. Today we have been given much more than they ever had. Plus we were given the instruction that we are to be "being knit together in love, and attaining to all riches of the full assurance of understanding, to the knowledge of the mystery of God, both of the Father and of Christ" (Col. 2:1-2).

"For this reason we also, since the day we heard it, do not cease to pray for you, and to ask that you may be filled with the knowledge of His will in all wisdom and spiritual understanding; that you may walk worthy of the Lord, fully pleasing Him, being fruitful in every good work and increasing in the knowledge of God; strengthened with all might, according to His glorious power, for all patience and longsuffering with joy; giving thanks to the Father who has qualified us to be partakers of the inheritance of the saints in the light" (Col. 1:9-12).
So the bottom line is: That which is perfect had come, so the sign gifts had passed away.

The decision is yours.

Other parts to this article:
Part 1
Part 3