David Barton and the Seven Mountains of Dominion Theology 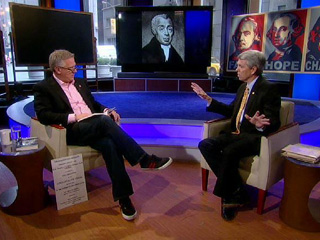 David Barton isn't fooling anyone. He's been an outspoken advocate of our Founding Fathers, portraying them as being born again Christians, when in fact they weren't. He was a guest on Glenn Beck's program, selling his Founders lies to the public. Since he is an expert in that area, he would have known that he takes the Founders quotes out of context.

Barton was also involved in a secular television production that pertained to the New Age movement. Brannon Howse has stopped asking Barton to his Worldview Weekend Conferences, because of his questionable associations.  Finally, the cat is out of the bag.

David Barton has tended to keep his ties to the Dominionists under wraps, and no one has heard him explicitly advocate Seven Mountains Dominionism ... until yesterday on his radio program (4/4/11):


Barton: There's five areas that you have to be able to influence and control if you are going to take a culture and that's media, business, government, education, and pulpit.
Now, for twenty years as it turns out - I wasn't even aware of this - way back, Bill Bright from Campus Crusade, when he was still alive, Loren Cunningham, Youth With a Mission, these guys got together back at the same time and really felt like there were seven areas that had to be taken for a culture and these are the seven that they gave: family, religion, education, media, entertainment, business and government. Now we've grouped some of those together and throw some together, but they said those are the seven areas you have to have and if you can have those seven areas, you can shape and control whatever takes place in nations, continents, and even the world.
Green: So it's the same idea, saying "look, every single area of the culture you need to be involved in."
Barton: That's right. Christians got to get involved. And there's a Scripture they used that came out of Isiah 2:2 and it says "Now it shall come to pass in the latter days that the mountain of the Lord's house shall be established on the top of the mountains," so this is now called the Seven Mountain Prophecy, there's a book out by that name.
It says the Lord's house is going to be established on top of the mountains and these are the seven mountains. If you're going to establish God's kingdom, you've got to have these seven mountains and again that's family, religion, education, media, entertainment, business and government.
Now that's what we believed all along is you got to get involved in this stuff. Jesus said "you occupy 'til I come." We don't care when he comes, that's up to him. What we're supposed to do is take the culture in the meantime and you got to get involved in these seven areas.

America is hungry for the truth, but he doesn't have it.